This is a hateful message.  The individual responsible should be ashamed.  If there are any FaceBook regulations that he has violated, he should lose his ability to post.  However, this single hateful message was all that it took for Geller & Spencer to not only post articles including the “Muslim” description, but also to tweet on the #MyJihad hashtag

So, according to them, this tweet by one individual jerk somehow is representative of “Islam in America” and this should be investigated by local law enforcement.

I wonder why their concern is always so selective, and only focuses on Muslims who behave badly.

Here are a just a few tweets from Islamophobic spammers on the #MyJihad site: 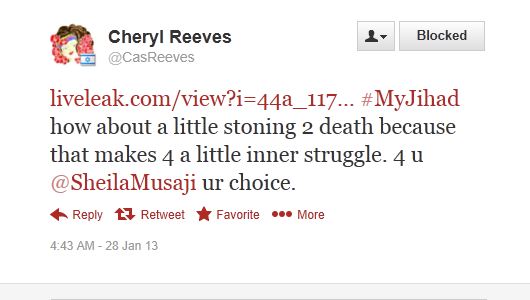 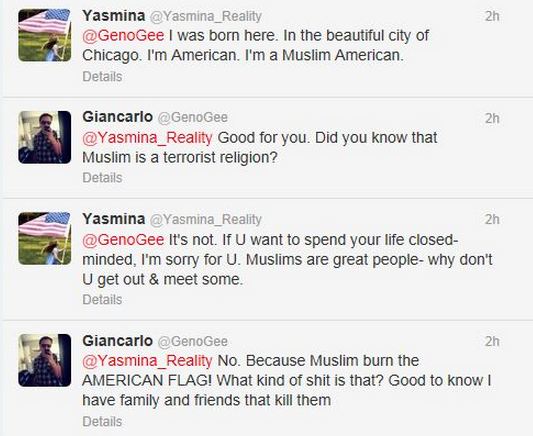 Would Geller and Spencer agree that all of these are hateful?  If so, why do such statements not concern them?  Would a headline like “Christian calls for killing Muslims” serve any purpose.  Are all Christians or all Jews somehow responsible for the bigotry of some?  Should all of these individuals also be investigated?  If they are not investigated is that “proof” of some Christian conspiracy to impose their will on non-Christians.

I doubt that they would be concerned, as some of their own AFDI/SIOA/SION leadership have previously suggested genocide, wiping out Muslim “bacteria” and “destroying Islam”.

This is pure hatred.