If you had any doubts of the type of cretins we are dealing with look who flew-in just for the anti-Muslim, pro-Israel massacre on Gaza rally.

In an apparent attempt to boost turnout – even Geller must be aware that the vast majority of New York’s Jewish community, including committed supporters of the state of Israel, will have nothing to do with her – the event was subtitled “And minorities persecuted under Islamic rule”.

According to Geller, an individual who enjoys at best a tenuous relationship with reality, the event attracted “thousands” of AFDI supporters, though it’s odd that her website contains no pictures of this vast throng. From photographic evidence, it looks as though the attendance was at most a couple of hundred. A report at the Huffington Post puts it at “around 150″.

The speakers included Israeli academic Mordechai Kedar (pictured), who flew to the US specially to address the rally. According to Geller’s report, he devoted his speech to showing “how the jihadists are proceeding according to quranic imperatives”.

You’ll remember Kaidar. He’s the man who recently hit the headlines after he argued that the only thing that would deter attacks on Israel would be if the sisters or mothers of the perpetrators were raped.

Very well done post by Paul Vale at the Huffington Post. Kind of hilarious. Geller even showed up to whine in the comments section.:

NEW YORK — On Sunday the American Freedom Defence Initiative (AFDI), an organisation the Southern Poverty Law Centre has listed as an anti-Muslim hate group, held a demonstration in New York’s Union Square in support of Israel and “minorities persecuted under Islamic rule”.

The group’s leader is Pamela Geller, an activist who in 2013 was banned from entering the UK by Home Secretary Theresa May. The government restricted Geller, along with author and blogger Robert Spencer, from entering the country as it was concluded their presence in the would not be “conducive to the public good”. The pair had planned to attend a rally in Woolwich following the death of Drummer Lee Rigby.

…along with Robert Spencer.

There were around 150 people at the event. 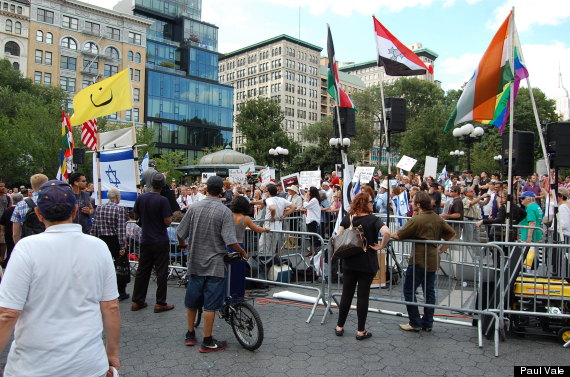 Many had come with homemade placards. 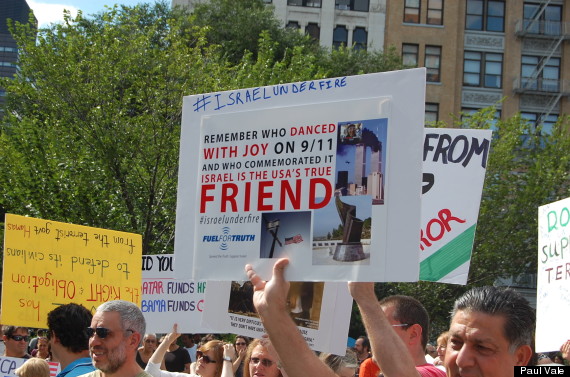 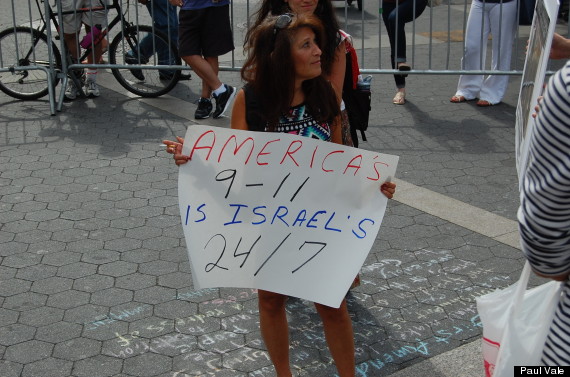 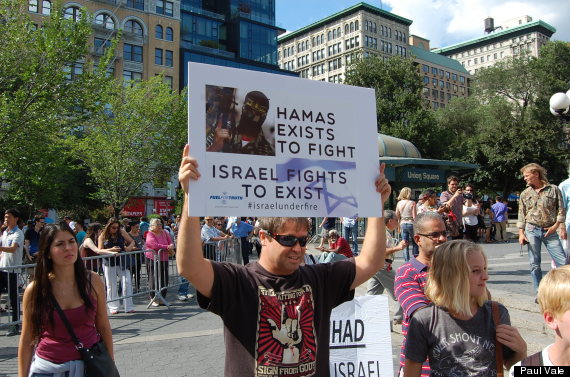 “The media” took a bit of a kicking… 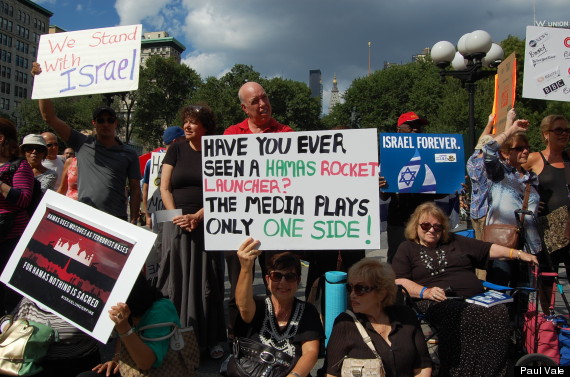 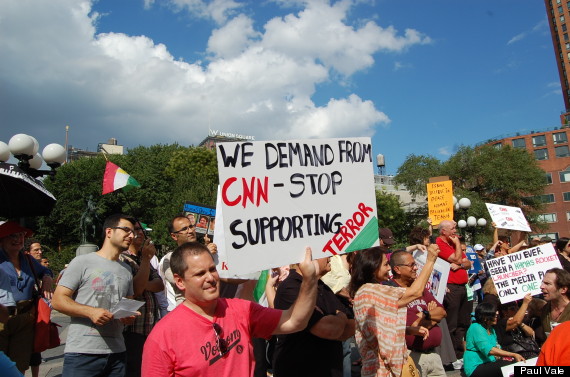 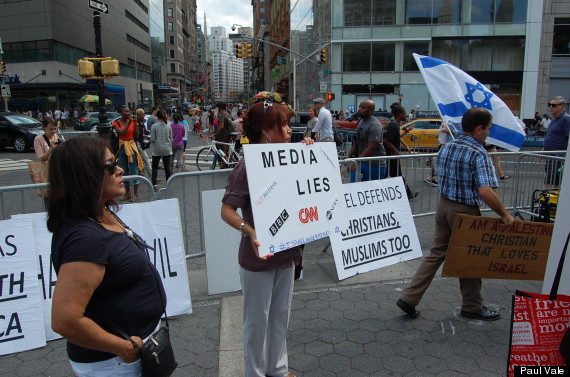 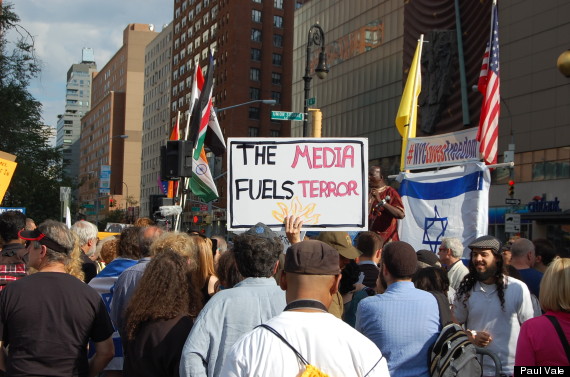 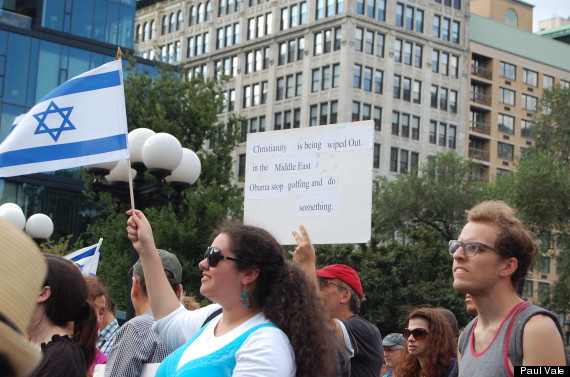 …despite being the only Western leader to authorise air strikes against militants in Iraq. 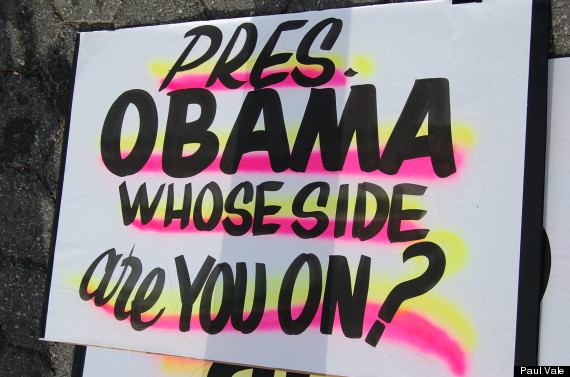 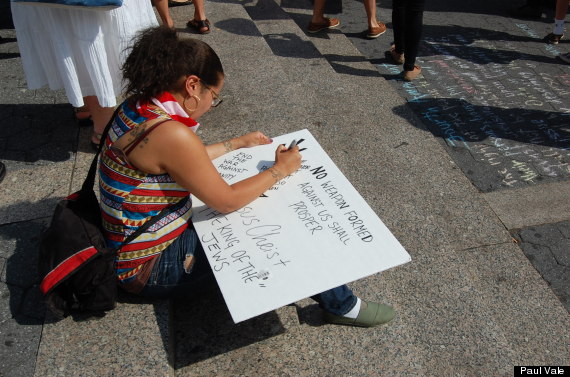 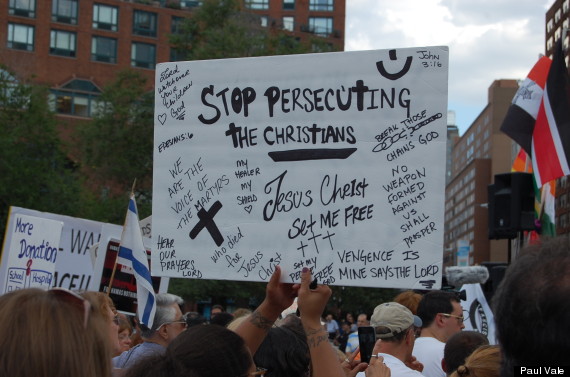 …whereas this chap just went to Home Depot. 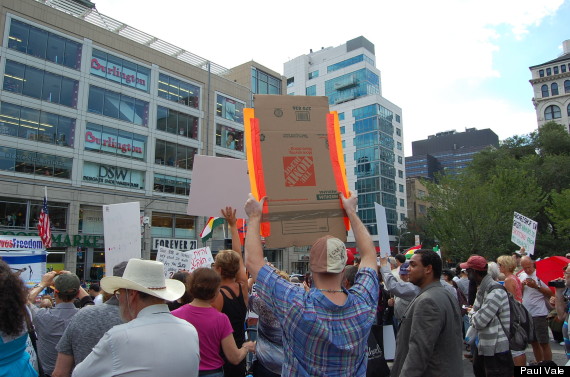 This guy forgot the name of ISIS.

While this entrepreneurial chap had a bag full of Israeli flags… 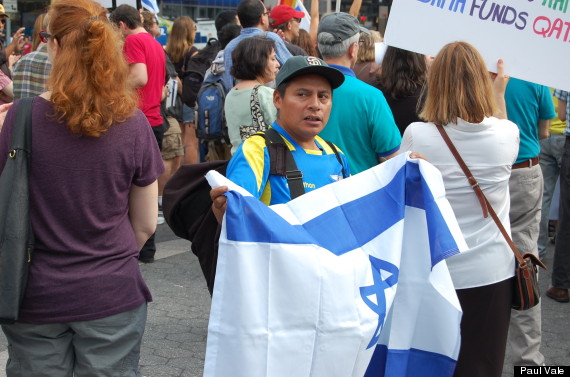 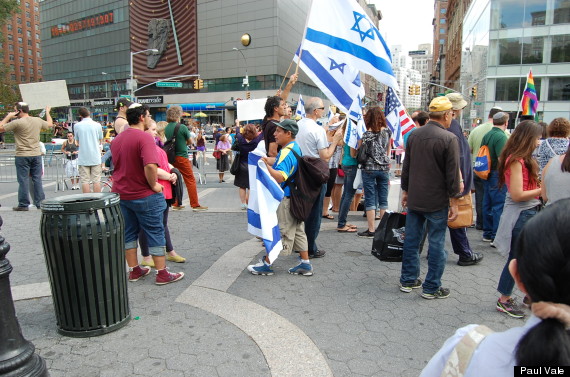 Then there was this piece of couture. 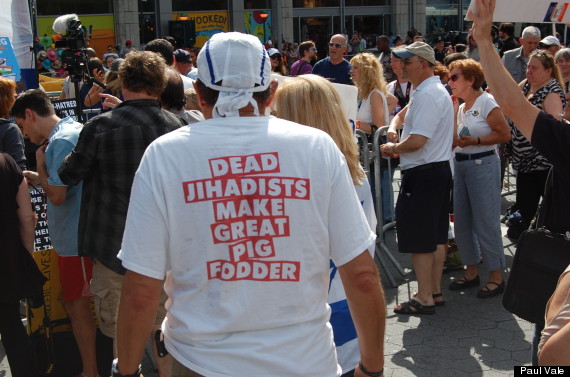 And this Panama hat. 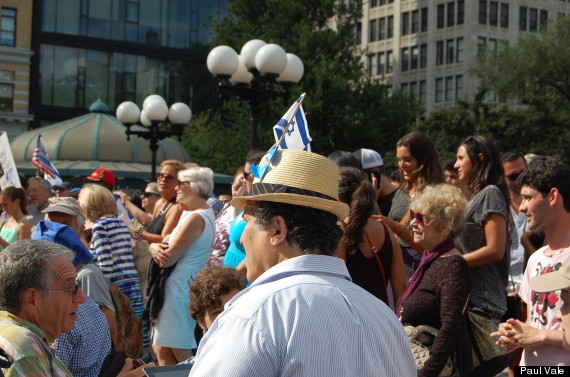 The disgraced David Horowitz’s dementia is acting up again. The US is Israel’s ally and supported its massacre in Gaza at great cost to its image across the world.

David Horowitz: Obama Said Nothing About US Boy Kidnapped In Israel ‘Because He Was A Jew’

In an interview with Janet Mefferd yesterday, FrontPage magazine editor David Horowitz falsely claimed that President Obama “said nothing” about the kidnapping and murder of an American boy, along with two Israeli friends, in Israel, saying that the president’s supposed silence was “because he was a Jew, I guess.”

In fact, the president issued a statement in response to the boys’ murders, calling it a “senseless act of terror” and promising Israel “the full support and friendship of the United States.” Secretary of State John Kerry also condemned “this despicable terrorist act in the strongest possible terms.”

“That’s a sick religion, Islam,” Horowitz also told Mefferd. “People have to recognize that and stop comparing it to Christianity.”

Horowitz also claimed that “tens of thousands of Americans are going to die because of Obama” because “terrorists are going to come across our borders, our porous borders.”

“Look what they’ve done. They’re operating as though this isn’t America. They’re destroying our borders. You can’t have a country without borders,” he said.