Just when you think that the Islamophobia echo chamber must have run out of possible nonsensical Muslim jihad plots to discover, they come up with something else.

Andrea Shea King published Obama sending Muslims subtle message? on Joseph Farah’s World Net Daily (WND) about a photo of Pres. Obama with his foot on the desk in the oval office.

This is not exactly big news since The Blaze has photos of Ford and Bush with their feet on the same desk here.  They published this after some people called Obama’s foot on the desk “disrespectful”.  Considering that WND thinks Chuck Norris qualifies as a Sharia expert, nothing coming from them should be a surprise.

The WND article goes well beyond calling this disrespectful.  The author says:

…  Is it possible President Obama had a White House photographer release this official image to the world to send a wordless message of support to the Muslim Brotherhood, Arab street and Islamic community in general? To convey his disdain and disregard for all things traditionally American? It is, after all, common knowledge that the Arab world considers the bottom of one’s shoes the ultimate sign of disrespect. And it’s not the first time he’s done it. …

Here is the photograph that WND includes to “prove” this latest nonsense: 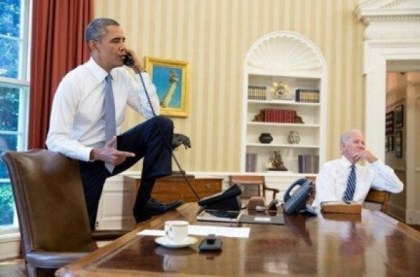 I can’t tell from this photo if Obama is wearing his “Muslim Ring”,  or holding his hand in a “special way” that actually sends a secret Muslim message, or whether he is talking on the phone in hissecret Muslim code language [all of these are previous claims made by Islamophobes including WND].

But, I do know that I would need a secret decoder ring or some other advanced super powers to detect any messages Obama is sending to anyone in this photo, or with secret hand signals, or secret language codes.  I have not received any such decoder, no hand signal manual, no dictionary of secret Muslim language codes, nothing — nor has any Muslim that I know.

No one except the lunatic fringe among even Islamophobes could take such claims seriously.  But then, the Islamophobes have previously come up with so many fake jihad plots that it is difficult to even keep up with them, and someone believes this crap.  Here are just a few of their previous revelations about devious Muslim jihad plots:

The Islamophobia Echo Chamber of which World Net Daily is a part are promoting total fantasies and paranoid conspiracy theories with no basis in fact.