I’m not surprised that EDL leader Tommy Robinson would retweet an account named “Knights Templar.” Robinson has in the past expressed sympathy with Breivik’s viewpoint and engaged in blame shifting Breivik’s crimes. The following also reveals the kind of company that the EDL keep.

With Norway bomber and far-right terrorist Anders Breivik who murdered more than 70 people in Norway just having been sentenced, it would be wise for the English Defence League (EDL) to distance themselves.

The EDL leader Tommy Robinson however, retweeted a status from an account that holds the name ‘Knights Templar’, the name of an extremist group that Anders Breivik was part of.

This account had a previous account that was banned because it posted up a picture of a United Kingdom flag with guns and ammo on top (glorifying violence?) 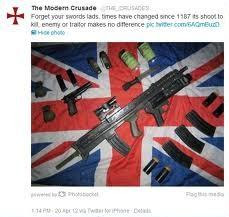 The admin advocates the burning of Qurans. It also supports the death of MP George Galloway, like the admin(s) of the EDL-affiliates South Yorkshire Infidels.

Note: Proof of cited behaviour is on the current profile.

Even Ivy League Universities such as Princeton are not immune from radical anti-Muslims. A Christian man by the name of Adam Pyle interrupted a Muslim Student “welcome back dinner,” telling them that “Muslims are going to hell.”

One can only imagine the hysteria this would have caused in the anti-Muslim blogosphere if a Muslim had barged into a Christian, Jewish or any other faith’s “welcome back dinner.”

This is also noteworthy in the backdrop of the terrorist attacks in Norway. Anders Behring Breivik claimed to be a member of the Knight Templars as well. While we should not extrapolate excessively from this one incident we should keep in mind that there is a rise in the appropriation of Christian Crusader theology, symbols and rhetoric amongst the anti-Muslim movement.

One need only look at Robert Spencer’s extolling of the Crusades and reiteration of its call, “God Wills it,” and to the fascination in anti-Muslim groups of Crusader symbols, vividly brought to the fore in our piece, SIOA is an Anti-Muslim Hate Group.

A local man claiming to be part of the Knights Templar was arrested on Saturday night after allegedly interrupting a Muslim Student Association welcome back dinner and telling students that “Muslims are going to hell,” according to multiple witnesses and police reports.

While the incident reflects a nationwide spike in bias crimes in the wake of the 10th anniversary of the 9/11 terrorist attacks, MSA members say they are treating it as an isolated event and do not plan to scale back any of their events in response.

The man, Adam Pyle, 26, of Princeton Township, had apparently been present for part of the actual dinner at Campus Club, said Sohaib Sultan, the University’s Muslim life coordinator. Toward the conclusion of the dinner, Pyle left the dining area and allegedly started going through the backpack of Jihad Al-Jabban ’14, the MSA public relations chair.

When Al-Jabban walked over, Pyle explained that he was a Christian but still a member of the “ummah,” the global Muslim community, according to Al-Jabban. Pyle then proceeded to bow and ask MSA members if they were members of the ummah, said MSA vice president Areej Hassan ’13. He also allegedly asked a member, “Why do you hate Jews?” Hassan is a  staff writer for The Daily Princetonian.

“I immediately became a little bit nervous about what his intentions were,” Sultan said. “I realized this could be a potentially violent situation.”

Sultan then ushered the 60 to 70 students attending the dinner into a closed room away from Pyle, and an attendee called Public Safety. In the meantime, Pyle allegedly said, “Muslims are going to hell” and “Death to Muslims,” and began walking toward the students, according to Sultan.

“I stood right in front of him and said, ‘I’m sorry, I’m not going to let [you] go inside,’ ” Sultan recalled. During the night, Pyle also allegedly made references to the anti-Christ, University Spokesperson Martin Mbugua said in an email.

At 8:57 p.m., Public Safety officers arrested Pyle and charged him with bias intimidation, criminal attempt, disorderly conduct, harassment and defiant trespass, Mbugua said. Pyle will face the criminal charges on Monday in the Borough Municipal Court. Public Safety ordered Pyle to stay away from campus for the next 90 days, and the department intends to ban him permanently.

A message left seeking comment at Pyle’s home phone number was not returned. Pyle is not affiliated with the University.

“You just never know the type of individual [who] might come in and do something,” Sultan said. “The Muslim community in America has seen a real rise in Islamophobia over this past year in particular, and so it shakes us up. We really did feel threatened.”

It is unclear how Pyle learned of the welcome back dinner, since the event was only advertised via email and with limited on-campus advertising, MSA board members said.

“I don’t even think it was premeditated,” said Sheeba Arif ’14, the MSA events chair. “I feel like he just stumbled in on it actually.”

It is also unknown how Pyle gained access to Campus Club, access to which was limited by prox at the time, Mbugua said.

Sultan said the incident has shaken up some Muslim students, and he is concerned that new students may get the wrong impression about the University.

“To the freshmen and first-year graduate students, please don’t worry. This was an isolated incident and you will find this campus as warm and welcoming to Muslims as anywhere in this country,” Sultan said in an email to the MSA listserv.

Sultan has invited officers from Public Safety to speak with students at Friday prayers this week to thank the officers and to discuss revising any safety protocols. Students praised the responding officers, who also offered to escort the members back to their dorm rooms after the event.

Sultan added, however, that he doesn’t anticipate any increased security as a result of the incident.

“We really do hope and anticipate that this was a completely isolated incident,” he said. “We want to continue being the open community that we’ve become at Princeton.”

Other religious organizations on campus, including the Office of Religious Life, have lent their support and have offered to hold discussions and vigils in response to the incident. MSA board members said they may discuss the issue broadly at the next Religious Life Council meeting, but they want to move forward.

“It’s an isolated incident,” Arif said. “We don’t want to make a bigger deal than it is.”

While advocacy groups noticed a rise in bias crimes around the 9/11 anniversary, Ibrahim Hooper, the national communications director for the Council on American-Islamic Relations, said that colleges and universities are often immune.

“Colleges and universities have typically not been a major factor in our annual reporting on bias-related incidents, just because they tend to be more open, more tolerant and more knowledgeable about Islam and Muslims,” he said.

Indeed, Sultan said he couldn’t recall any similar incident occurring on campus, except for the occasional controversial speaker or offensive email. Mbugua also said this is the first incident of its nature to happen on campus.

“I think it’s still on the minds of students, but I think we recognize this was completely an isolated incident,” Sultan said. “Princeton University has been a wonderful and very welcoming home for Muslim students and faculty for many years.”