Robert Spencer’s old buddy Debbie Schlussel on Lara Logan. On his own hate site Spencer employs his usual goonish modus operandi whereby he related what happened to Lara Logan to a verse in the Quran. Is he sick or what?

Anyhow he conveniently looked over the fact that those who saved Logan were Muslim women and the Army of Egypt. One wonders if the cynical Robert Spencer will find it fit to link the Bible to rapes in the US military (hat tip: Alexandria):

Debbie “getting-more-irrelevant-by-the-day” Schlussel is lashing out for attention once again. This time she is celebrating the suffering of CBS reporter Lara Logan who was surrounded by a “dangerous element” amongst celebrators at Tahrir Square.

Lara Logan suffered sexual assault and a brutal beating, she was saved by “20 women and a group of Egyptian soldiers” and is now back in the United States where she is recuperating. It is unfortunate that Schlussel is so extremely vile that she would take this incident to bash Lara and call all Muslims “animals” but it’s not surprising.

One wonders if Schlussel is human:

As I’ve noted before, it bothers me not a lick when mainstream media reporters who keep telling us Muslims and Islam are peaceful get a taste of just how “peaceful” Muslims and Islam really are. In fact, it kinda warms my heart.  Still, it’s also a great reminder of just how “civilized” these “people” (or, as I like to call them in Arabic, “Bahai’im” [Animals]) are: 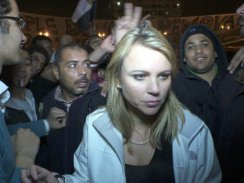 And remember this is the person that Robert Spencer alongside Pamela Geller described as a “freedom fighter.”