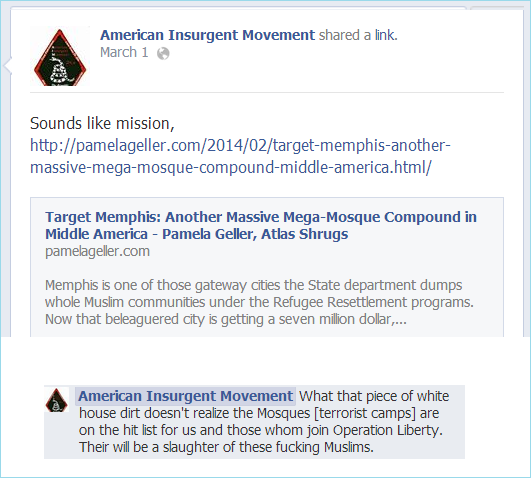 Inventing “Islamic” crimes has been one part of the hatemongers consistent methodology of smearing Islam and Muslims.

For instance, in the past month Spencer and Geller falsely accused Islam and Muslims as the perpetrators of invented Jihad attacks at least twice to our count:

*Recently Spencer tried to tie a Belgian shooter to Islam: Belgium, Islam and the Boomerang of Loon Idiocy

And now we can add a third:

The so-called “counter-jihad” bloggers are covering themselves in glory again, slobbering and ranting and trying to take advantage of a terrible crime to advance their un-American agenda.

This time they’ve seized on a story about a man in Texas who killed six members of his own family on Christmas morning while dressed in a Santa suit, then committed suicide. The man’s wife had left him, his home had been foreclosed upon, his business was failing, and he had filed for bankruptcy; with anyone else, these things would be considered strong motives for committing this massacre.

But because the man’s name was Aziz Yazdanpanah, and he was apparently unhappy about who his daughter was dating, these bloggers have decided it had to be an “Islamic honor killing.” And now they’re letting their bigotry run free again.

Hate group leaders Pamela Geller and Robert Spencer are out in front, as always.

The mainstream media has reported this as the “Santa killer.” No mention that it was an Islamic honor killing until this Dallas Morning News story. Our daughters and granddaughters are going to be the ones who will suffer because of for this obfuscation and excusal of barbarism.

This has been going on for years. When Amina and Sarah Said were brutally murdered by their father, also in Texas, on New Year’s Day 2008 for the same reason — having non-Muslim boyfriends — I thought, this is it. This is going to break the dam wide open. America would not, could not possibly, ignore this horror caused by and sanctioned by Islamic beliefs, assumptions, and attitudes.

And yet America continues to ignore this horror. And more and more people are victimized every day.

Spencer: Islamic honor killing in Texas: ‘Santa’ who murdered family on Christmas morning was Muslim who didn’t like his daughter dating a non-Muslim – Jihad Watch

Again and again we have seen honor killings in which fathers kill daughters who are dating non-Muslims or have supposedly besmirched the family honor by some sexual indiscretion. Lt. Todd Dearing says that motive isn’t important — which is generally only the case when Islam is involved.

To recap: Yazdanpanah killed his family members while they were all celebrating Christmas and then committed suicide. He was wearing a Santa suit. His life was falling apart in just about every possible way.

But to these vile bigots, it had to be an “honor killing” — for no other reason than the man’s nominal Muslim faith. It’s almost unbelievably disgusting.

And the posts by these bloggers are just the tip of the iceberg; their followers have no restraint whatsoever. Some of the comments posted at “counter-jihad” blogs about this tragedy:

Satan and muzzies are two of a kind…..

We can’t offend muslims with Christmas but a muslim can kill his whole family on Christmas day and the media won’t even go near the fact they were all muslims.
We only find out on the crazy right-wing internet.

Once again we have the media filtering out information they don’t think we need to know.

2 miles from my house, a stinkin’ Muslim is committing honor killings. Islam, the Koran, and all true followers need to burn.

We live in the same neck of the woods. My Granny lived there for a year, was a nice complex, but over the last few years has had more and more muzzies moving into it. The entire metroplex has had a huge upspike in moozlim population. But still the Media and the masses are lulled to sleep with the peaceful moozlim rhetoric.

These men who are Muslim and believe in this should never have children or be castrated.

Americans may wish to consider how safe it is to have Muslims in their neighborhoods, but that would make us bigots wouldn’t it.

Here’s an example of the double bladed sword of ” PC “. This piece of camel crap doesn’t deserve to be buried in the ground!!!! They should kill a pig and bury it with him!!!!

I AM surprised that this being a raghead, he didn’t rape his daughters first.

As sad as this event is it nonetheless points out the truth that a muslime can not be anything but a brutal, murdering, control freaking, inbred son of a muslime sex slave who-e.
No matter their public persona their heart and mind is convuluted and warped to commit atrocities.

Go figure, a sheethead dressed as santa kills everyone, and then himself.

Perhaps Mr. Yazdanpanah was suffering from the terrible disease known as “SUDDEN JIHAD SYNDROME” though I doubt an autopsy will be be of any help. If he was a faithful muslim the demons probably summoned him to butcher his family for rebelling against Allah.

What a waste of life. Islam = hate and murder. Islam offers NOTHING to anyone, anywhere, anytime. Absolutely nothing.

These are only pious demon worshipers practicing their demonic cult, fully protected, by an army of feds and prosecutors all of whom report to comrade holder, as a *religion*.

There are thousands of similar comments about this story, all over the right wing blogs. These people aren’t even trying to pretend they’re not hateful bigots any more — they’ve embraced their sickness.

You’ll note that the main authority Tancredo cites in his attack on Perry is “Islam scholar [sic] Robert Spencer, head of Jihad Watch”.

For all you need to know about the terror inspirer and terror linked Robert Spencer visit: www.spencerwatch.com

Tancredo accuses Perry of being soft on migrants and Muslims

In a column for the Daily Caller, Tancredo, who ran twice for his party’s presidential nomination in an effort to inject the illegal immigration issue into the larger debate, is slamming Perry for his soft policies on illegal immigration in Texas – and what Tancredo calls his “Muslim blind spot.”

“What is not yet as widely known about Perry is that he extends his taxpayer-funded compassion not only to illegal aliens but also to Muslim groups seeking to whitewash the violent history of that religion,” Tancredo writes. ”Perry endorsed and facilitated the adoption in Texas public schools of a pro-Muslim curriculum unit developed by Muslim clerics in Pakistan.”

Tancredo cites a study by The Center for Immigration Studies, which shows that 81% of the 279,000 jobs created in Texas in the past four years went to non-citizens, a high number of them illegal aliens, to discredit Perry’s central presidential argument – that he’s overseen a “Texas miracle” of job growth while the national economy continues to decline.

And in 2008, as Tancredo points out, Perry helped expand the Muslim Histories and Culture Project, a teacher-training program spearheaded by Texas Ismailis that introduces Islamic history and culture curricula into Texas schools.

While many of the GOP’s 2012 contenders have sought to distance themselves with Islam, Perry, Tancredo points out, refused to endorse a proposal in the Texas legislature to outlaw Sharia law in the state.

“What is it with Republican elites like Perry?” Tancredo writes. “Do they think Republican primary voters are stupid? Does Perry think he can talk tough in defending the Texas death penalty and then waffle on border security and taxpayer support for illegal alien children? Why does he think he can claim to be the ‘tea party candidate’ while endorsing a whitewash of Islamic extremism in Texas schools?”